Estimating power consumption and carbon impact of deep-learning on Nef

Ecological impact of IT is an increasingly important matter. This is why estimating the impact of a computation is useful, both for assessing the cost of a research activity or designing efficient methods. Power consumption and carbon emissions of a computation are commonly used metrics, as this is a more simple approximation than taking into account the full life cycle of IT infrastructures.

We tried several simple ways of roughly estimating the power consumption and carbon impact of training a ResNet-50 deep-learning model on Nef cluster. This post presents them along with the results obtained. Please note this is only meant to be a first step in the field, not a detailed study, but they’ll hopefully catch interest of some Inria Sophia teams to prepare next steps.

These tests were done by SED-SAM and are related to Inria Sophia sustainable development commission (CLDD) efforts, and its DD newsletter #5 and newsletter #6 (to be published when this post was written),

For the tests we used :

Tesla T4 is a low power GPU (70W) marketed by Nvidia (back in 2019) as their most power efficient accelerator. Quadro RTX6000 is a powerful cost effective GPU for deep learning, with a maximum consumption (TDP) of 260W.

Depending on the test we estimated or measured power consumption of some hardware elements (GPU, CPU, RAM) or of the full server. To compute a full power consumption, a Power Usage Effectiveness factor (PUE) was applied to take into account the cooling system of the server room, etc. PUE for Inria Sophia server room estimate is 1.65 (2018 numbers). Depending on the test, carbon intensity of electricity (CO2 g / kW.h) was either automatically chosen by the tool depending on geographical region (France) or we used the 2018 average estimate from the French Environnement Agency (ADEME) of 57.1 CO2 g / kWh for electricity produced in France.

We used the following different ways for estimating power consumption and carbon impact :

Results are summarized in the following diagrams : 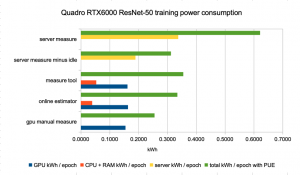 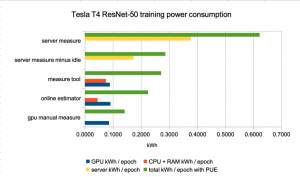 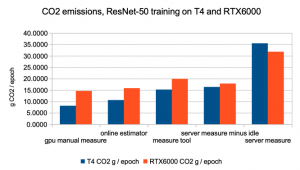 A few comments on these results :

Conclusion on suggested use cases for these methods :