PREDNET was presented at the SenZations’15 – tenth edition of a PhD summer school in the field of IoT.
For more details, please visit: http://senzations.net/

Radio propagtion through vegetation low above ground level, is known to be very difficult to model. Some attempts to do this, were carried out by Viktor during his visit to Stellenbosch University, South Africa, end last year. He used a new UHF transmitter module, which could then be evaluated at the same time.
He got some interesting results, which will need further field trials to properly verify. However, it was a good start. 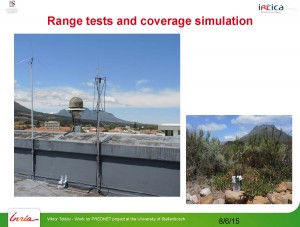 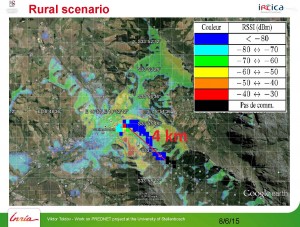 A very useful PREDNET planning meeting took place at Inria Lille Nord Europe on 7 &8 Aug recently. It was attended by Inria and SU researchers headed by Dr Nathalie Mitton and Dr Riaan Wolhuter respectively. Also attending, were the two SU postgrad students doing research on the Inria test platforms. SP le Roux presented his rhino tag design and explained his classifier approach. Viktor Toldov gave some information regarding his radio tests in South Africa, as well as an overview for his first network strategy. It was decided that:

1. The network strategy would be completed, simulated and evaluated
2. Practical network testing should be done as soosn as possible
3. Miniaturation of the tag is definitely possible and would be a next step
4. Attention should very soon be given to the packaging aspects of the rhino tag. Fixing it to the animal is a a difficult problem
5. Funding is an important aspect. Without that we cannot make any progress. Previously, we did not have too much to show to potential funders. However, there has been some good progress in the interim. As soon as we have a practical network going, some potential funders will be approached to attend a demonstration.

SP le Roux of SU has managed to successfully implement an on-animal rhino movement classifier. The code has been embedded in the same low power CPU for the tag recently developed and tested at the rhino orphanage. We can now get real-time information whether the animal is behaving normally, or not. For convenience, the system was first tested on sheep before implementing the accellerometer data obtained from the earlier rhino tests. This is a major step forward in building an intelligent network.

The PREDNET project was presented at the BeyondLab event in Lille, France, devoted to connected objects. After a brief presentation the interested audience discussed about other possible use-cases for the PREDNET’s technology.

After successful tests on sheep, the PREDNET team has tested the developed wearable connected monitoring device on the rhinoceroses in the private farm. We obtained interesting data about animals’ mobility. The animals were brought up as orphans and are reasonably used to humans, particularly at feeding time. The tags can be made much smaller, but at this point we just wanted some results from hardware as it stands now. What was clearly shown, is the extreme robustness required for these units. Just look at the mudbath! Also, from a radio transmission point of view, the position so low on the ground is not perfect, but rhinos do not offer you many other options. 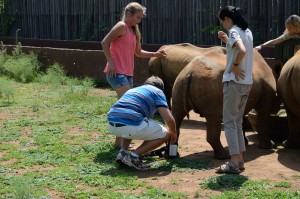 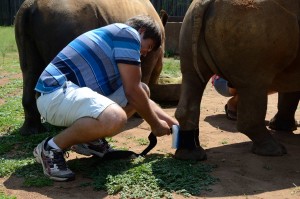 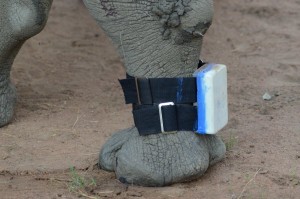 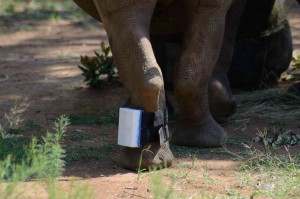 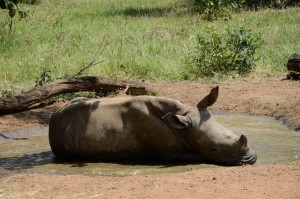 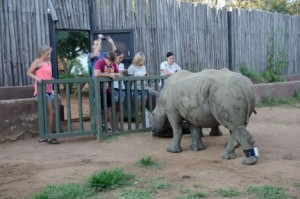 In the context of the Crossed Seasons France South Africa, the PREDNET team organized in 2012  a workshop in Stellenbosch around the deployment of wireless sensor networks. This year, they organize the mirror event in Villeneuve d’Ascq on Sept. 30rd and Oct. 1St.
This event is free and everybody is welcome. For more details and registrations, please, visit this link.